of Love and Power

from UPCO’s 2016 performance of the Chevalier des Saint Georges concerto in G major for violin and orchestra:
Movement two, Largo, is free in a way unprecedented. The orchestration is minimal, leaving room for the solo voice to soar far above. The concerto builds to the apex of this movement, and leaves room for an extended cadenza, or purely solo moment, by the violinist. As this work is not standard to the western musical canon, there is no existing cadenza in place. In principle, this is egregious; in practice, it exists as an opportunity. I felt the personal need to create a statement of respect to the legacy CSG deserved, and in so doing, pay homage to the musical titans of sister genres and generations that I hold in equal esteem. Early on, I decided to call it 'Nanon,' after Anne Nanon, CSG's mother and freed Senegalese slave who lived on the island of Guadeloupe at the time of his conception. In this vein, I aspire to include musical statements from personally iconic female figures who spoke, sang, and testified more effectively than I ever could. Nina Simone's recording of Black is the Color is quoted alongside my own extensions of CSG's existing writing, as well as self-composed phrases that act in a manner reflective of my own experiences straddling several worlds without feeling the constant, grounding acceptance of one.

Nanon also seeks to re-create improvisational elements of my father’s work as a (primarily) jazz percussionist, through which I have profound appreciation for titas like Fela Kuti and Clyde Stubblefield. Within the arc of the concerto as a whole, and more specifically, the framework of the middle movement, my intention is to peak at this place; where I hear the freedom Anne sought, and by extension, her inurement as a woman taken from her native Senegal. Here is where I hear CSG’s conception, birth and maternal sacrifices made in order to protect the reputation of a gifted Black son in a Europe that extended its Enlightenment privileges to everyone except people of color.

Specifically, meter-less rogue chords toward the middle of the cadenza signify the frustrations and powerlessness he most certainly felt after removing himself from being considered as director of the Paris Opera so as not to unsettle a socially precarious relationship with the queen by the “honor” and “delicacy” of three operatic soloists who could not conceive of taking direction from a Black person in a position of leadership.

For this performance, I’ve included electronics, fragments of words from choice literary figures that are fundamental to my personal evolution as a Black woman of mixed race, oracles like Toni Morrison (who remains a through-line to my personal inspiration), bell hooks and Octavia Butler, that are able to reach into the past to link the experiences of the women like Nanon that came before me to my own. 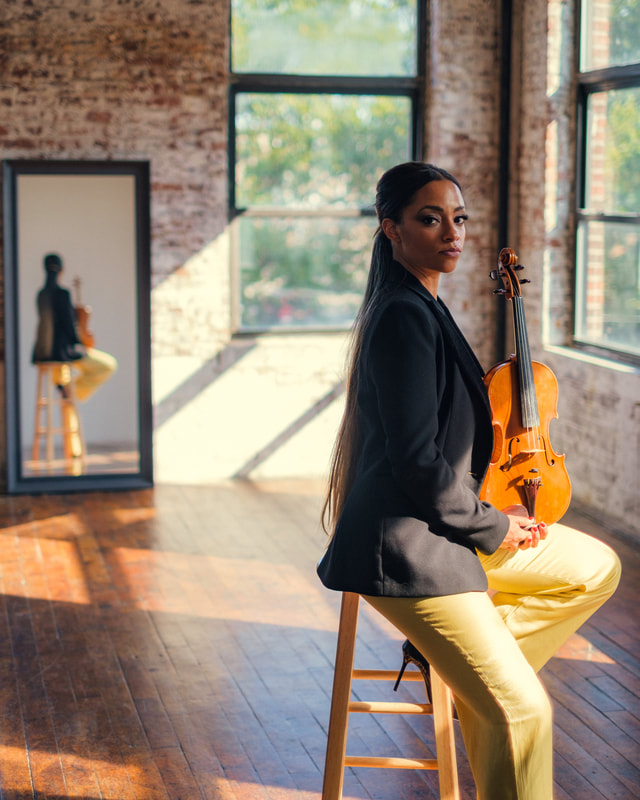 (in her words)
MIDDLEGROUND: the space grounded, the between, the center. The Heartland. The prairie, the grasslands, Konza, Flint Hills, Manhattan, Emporia, Salina. Where we gathered.

Home of the heart, heart of the home.

Together, with our wonder, our joy, we created an incredible painting with abounding colors. The kinds of colors that linger in the minds eye long after they are out of sight and cradle you long after goodbyes are spoken and car doors closed. The kinds that find you counting the days until the next birthday, the next holiday, the next bike ride, the next Camp, the next anything just so you can see them again. When you close your eyes you feel their warmth. They stay.

The middle ground: my refuge born from the land living in my heart. Where my home is, living and breathing outside of my body, thousands of miles apart. This hallowed ground. 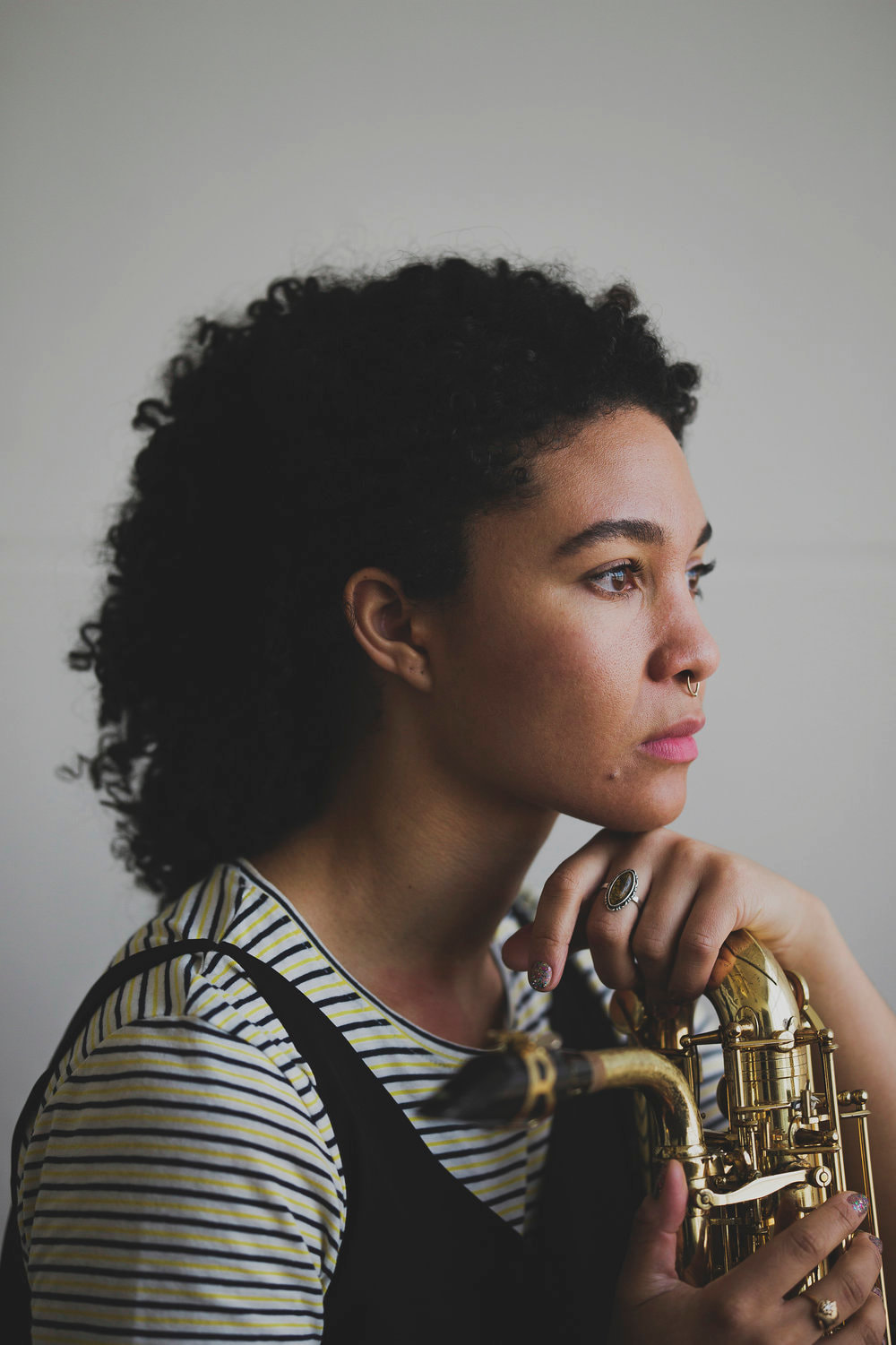 In a manner that arguably foreshadowed the unapologetic joy with which so many are living their respective truths (and loudly), Julius Eastman flaunted and stretched social boundaries, to the fascination of his colleagues and the chagrin of others.

Like too many are unwilling/unable to do, Eastman existed purely in the truth of all that he was. His motto, which he described to the Buffalo Evening News in 1976, was "to be what I am to the fullest: Black to the fullest, a musician to the fullest, and a homosexual to the fullest." A love of art and truth was his power; the institution-at-large’s near-sudden inception/acknowledgement of his body of work into the standard canon is a testament to this fact. Surrounded by predominantly white, Euro-centric heroes of the Classical avant-garde (Cage, Feldman, Foss), Eastman used innovations in composition and performance practice to push those boundaries. In this performance, we examine the incontestable need for existential fortitude and the consequences and sacrifices that made up so much of this man’s dynamic life. In my personal experience with the work, in the repetition, I hear cycles of both tension and release. Such is the human experience. On the 1974 album, the hymn Be Thou My Vision  is included towards the end of the piece. Regarding this, New Yorker critic Alex Ross writes:

‘…following the 1974 recording, launches into the old hymn “Be Thou My Vision.” That Ivesian gesture leads to a spell of harmonic turbulence before a general winding down begins.

With such florid discontinuities, “Femenine” breaks free of the template of classic minimalism. Riley’s “In C” and Steve Reich’s “Music for 18 Musicians” shimmer and flow, dancing a little off the ground. “Femenine” stomps, strides, and storms. The startling hymn quotation is typical of Eastman’s method: he does much the same in his 1979 piece “Gay Guerrilla,” which makes an unexpected swerve into “A Mighty Fortress Is Our God.” The composer is serving clear notice that the entire history of music will be his raw material. He has now become part of history himself, all the more influential for being impossible to define.’
​
Eastman died alone in a Buffalo hospital, his obituary only published eight weeks later. 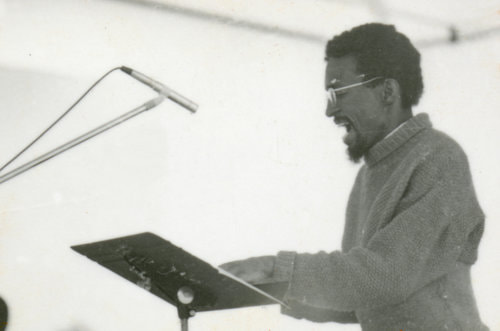 Be Thou My Vision
Be thou my vision, O Lord of my heart;
naught be all else to me, save that thou art.
Thou my best thought, by day or by night,
waking or sleeping, thy presence my light.
Be thou my wisdom, be thou my true word;
I ever with thee, and thou with me, Lord.
Born of thy love, thy child may I be,
thou in me dwelling and I one with thee.
Be thou my buckler, my sword for the fight.
Be thou my dignity, thou my delight,
thou my soul’s shelter, thou my high tow’r.
Raise thou me heav’nward, O Pow’r of my pow’r.
Riches I heed not, nor vain empty praise;
​thou mine inheritance, now and always.
Thou and thou only, first in my heart,
Ruler of heaven, my treasure thou art.
True Light of heaven, when vict’ry is won
may I reach heaven’s joys, O bright heav’n’s Sun!
Heart of my heart, whatever befall,
still be my vision, O Ruler of all

Shelley Washington (b. 1991) writes music to fulfill one calling- to move. With an eclectic palette, Washington tells stories focusing on exploring emotions and intentions by finding their root cause. Using driving, rhythmic riffs paired with indelible melodies, she creates a sound dialogue for the public and personal discourse. Shelley performs regularly as a vocalist and saxophonist, primarily on baritone saxophone, and has performed and recorded throughout the Midwest and East Coast- anything from Baroque to Screamo. She holds degrees from Truman State University; a BA in Music focusing on saxophone, and a Masters of Arts in Education. She also holds a Masters of Theory and Composition from NYU Steinhardt, where she studied with Dr. Joseph Church, Dr. Julia Wolfe, and Caroline Shaw. As an educator, she taught for the New York Philharmonic's Very Young Composers program, and was acting Artistic Director for the Noel Pointer Foundation, located in Brooklyn, NY. In the Fall of 2018 she began studies at Princeton University in pursuit of the PhD of Music Composition. Shelley is a founding member of the composer collective, Kinds of Kings.
Instagram | Website

Lady Jess enjoys atypical performances that challenge boundaries of genre and tradition. She is a frequent soloist for The Moth Radio Hour on NPR, and has performed in residence with Alonzo King LINES Ballet, Camille A. Brown Dance (CABD), and Nantucket Dance Festival, among others. Recent projects include the Emmy-nominated documentary and accompanying live album Homecoming, the On The Run II World Tour with Beyonce and Jay-Z, recording and arranging strings while on tour with the Carters for their joint album Everything is Love, and the recently released soundtrack to Disney’s The Lion King with Hans Zimmer.

LJ is invested in the immediate diversification of the stage and screen; as a contractor, she has been instrumental in ensuring the visibility of musicians of color for television, film and live performances. To this end, she has collaborated with Common, Robert Glasper, Kelsey Lu, Questlove Gomez, Solange, Kamasi Washington for performances at the Kennedy Center, Radio City Music Hall, Hollywood Bowl, and more.

Born in New York City in 2014, Urban Playground Chamber Orchestra prioritizes the music of composers of color and female composers to further enliven the classical canon. The ensemble is malleable in size, genre and venue, and creates new spaces for classical music in partnership with our diverse, vibrant audience. Urban Playground broadcasts historically marginalized voices, and nurtures emerging composers.

THIS TOO MUST BE HEARD